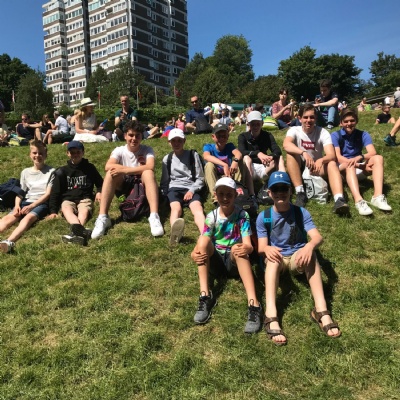 Pupils from Westcliff High School for Boys recently had the opportunity to visit one of the most renowned events in the sporting calendar, the Wimbledon Tennis Championships.

As a UK School of Tennis, Westcliff High School for Boys is guaranteed subsidised tickets for the world-famous event. Ten lucky students, from Years 7 to 10, travelled to the All England Club on 4 July to take their prime seats on Court Number 2 to see some of the world’s best tennis players during the first week of the tournament.

In glorious sunshine, the boys and accompanying members of staff, enjoyed watching various singles matches including the UK’s Daniel Evans playing Nikoloz Basilashvili from Georgia. Daniel Evans won the match in straight sets, taking him through to the second round. Afterwards on leaving the court, he signed the ticket of Year 8 WHSB pupil Oscar Clarke who said:

“It was such an exciting match; we were all on the edge of our seats willing him to win. I managed to get him to sign my ticket afterwards!”

“Going to Wimbledon is for some a ‘once-in a-lifetime’ opportunity. Every year, Westcliff High School for Boys, being a UK School of Tennis, is able to offer some of our pupils the chance to go.”